Over the last 30 years, Navdanya has been conserving biodiversity through a network of seed keepers and organic producers spread across 22 states in India and Bhutan. It has helped set up more than 124 community centered, decentralized indigenous seed banks across the country, which are freeing farmers of dependence on costly commercial seeds and helping them move from vulnerability to resilience in the context of climate change. More than 4000 rice varieties have been collected, saved and conserved by Navdanya. Forgotten food crops such as millets, pseudo-cereals and pulses, which were pushed out by the green revolution and expanding monocultures, have been conserved and promoted by Navdanya.

Navdanya’s research in different agro-climatic situations confirms that even in the most adverse climatic conditions, biodiversity based organic farming (higher crop diversity) is better capable to minimize the crop losses than that of monoculture-based industrial farming. With the increasing number of disasters, Navdanya started conserving climate resilient seeds and encouraged farmers to grow and multiply native climate resilient varieties, starting a program “Seeds of Hope” to help the disaster affected farmers. Since 1998, farmers affected either by floods or droughts have been able to cope with extreme conditions with flood tolerant, salt tolerant and drought tolerant seeds saved by the program seed saving network.

Navdanya continues to collect and conserve climate resilient seeds in the seed banks in Uttarakhand, Odisha, Maharashtra and now most recently in Rajasthan, Bundelkhand and Madhya Pradesh. In 2016-2017 a total of over 15000 farmers received seeds from different seed banks of Navdanya such as cereals, millets and other seasonal crops and vegetable seeds. 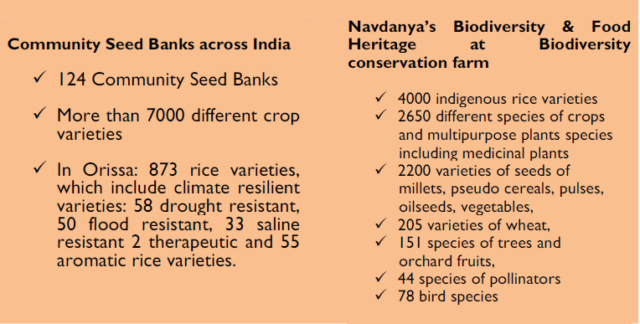 Bija Swaraj is our birthright

(Watch ‘The Living Seed’ film, produced by Navdanya, which eloquently portrays the contrasts and challenges faced by small farmers struggling with invasive, unsustainable technologies and greed of foreign agribusiness rocking their lives and tearing the fabric of their culture).